Students join a seminar for their specialization, where they master essential techniques and key concepts. In addition, the department emphasizes a holistic approach to learning about cinema through coursework including cinema theory and documentary films.

The hands-on film production experience consists of 4 studios (Orientation Studio, Summer Studio, Winter Studio/Production Development, and Documentary Studio*), as well as a final graduation film. The department covers the production costs, depending on the scope of the film. The first-year production focuses on working as a team with other crew members and developing individual technical expertise. The second-year production provides an opportunity to further explore cinematic expression. For the final graduation film, students are expected to utilize their technical skills and knowledge of the creative process to produce top-calibre works for submission to international film festivals. 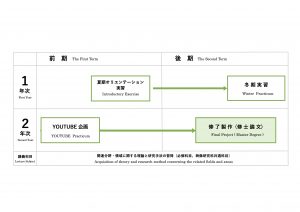